Strack Farms Restaurant passed into memory last month, a Klein, Texas cafe and barbecue joint which came into being three generations ago when the family began selling barbecue sandwiches out of its country store adjacent to the Strack vegetable farm.

The restaurant served for many years as one of the dwindling connections to the history of the Klein community. It was a popular eating spot for longtime residents, local firefighters, sheriff’s officers, civic clubs and school groups. It was a venue for many anniversaries, wedding showers and reunions. The Houston Chronicle reported that in its last days, the place was packed with loyal patrons as news of the impending closure spread–like family gathering around an old grandfather for one last goodbye.

Brothers Herman and Heinrich Strack came to Texas from Prussia in 1848, part of a steady wave of German settlers who made the voyage to Texas in the mid 1800s, attracted by the opportunity to purchase large swaths of land. Three other brothers, Johann Jost, Friedrich and Jacob, joined them a few years later. The parcel the Stracks purchased was from two of the original Texas land grants, 1,200 acres near Cypress Creek, northwest of present day Houston. The Stracks farmed there for over a century. As the family grew, the land was divided further. Some was donated to the school district. (My son attended Strack Middle School.) A large tract was sold off for residential development a few years ago. Roads are named for the Stracks and a historic family cemetery is still maintained by an association of family members.

What I loved most about Strack’s was ordering from their “carryout service” menu. When we moved to Klein in the 90s, the take out we ate from Strack’s was my first experience with Texas barbecue. Pinto beans, thin vinegary sauce and meats that were good without being painted in syrupy thick sweetness.

The restaurant building was divided into two parts, the 300-seat dine-in wing on the righthand side, the takeout kitchen on the left. While you were waiting for your to-go order (and it wasn’t long, they were fast), you could get your fixins at the step up bar, an island in the middle of the room: slices of raw onion, dill pickles, whole jalapeños. You would shove them into little wax paper bags that folded closed, like an envelope. Take as much as you wanted.

How many times did I step up to that little bar?

You often ran into someone you knew, because everyone picked up there. You could buy a Coke from their refrigerator, sip on the icy bottle and talk while they were wrapping up your family dinner plate, your quarts of beans and your extra pint of sauce. They would smoke or fry your turkey for the holidays, if you brought it in.

I never got around to doing that, and I wish I had.

I’m trying to recall the last time I was there. It was a few years ago when we lived in the neighborhood right across the street and ordered almost weekly–chopped beef sandwiches, smoked turkey, onion rings, good sauce and good beans. It was near closing time when my daughter and I arrived to pick up our order. Very quiet inside. A guy who worked in the building next door rushed in on his way home to get his “usual,” two steamy slices of juicy brisket that the girl behind the counter carefully arranged in accordion-style folds as she placed them in the small styrofoam box. The smoky smell was so enticing–did he somehow eat them on the drive home, I wondered?

I’m going to miss Strack’s because it was a connection to people I shared it with who aren’t around anymore, a frail but tangible bond with the past that kept my memory of them a little more palpable. As long as Strack’s was here, it still seemed like I had seen them just the other day…

A friend of mine grew up in Klein in the early 70s, when it was still a community with its own identity, many of the old German families still active. Fast forward to 2010. Her father doesn’t get around much anymore. Klein is a booming suburb, nice restaurants, fast food and everything in between. She regularly picks him up for lunch. Where’s the only place he’ll eat? Strack’s.

The kind of guy, who, when he died a few years later, his kids placed his boots alongside the family photos at the funeral.

That’s the kind of guy who ate at Strack’s.

Stalwart, consistent, not showy, just got the job done, a pillar of the community. 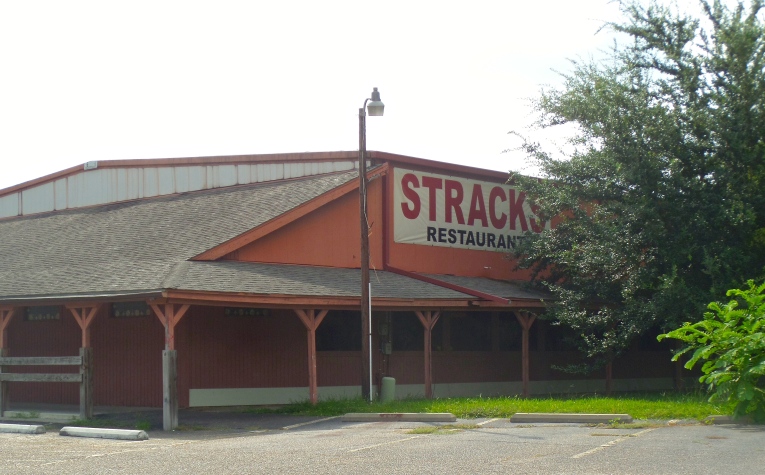