Last year John and I attended a horizontal Bordeaux tasting and dinner held by one of my favorite wine gurus at a great little midtown restaurant. It was a fine evening until the drive home. After encountering a couple of wrecks and an interminable number of mystifying slowdowns along I-45, we finally reached our driveway two hours later. It’s that kind of experience that makes it difficult to work up the enthusiasm to drive “into town” on a weeknight for dinner. And that’s a shame, because some of my favorite eating is inside the loop.

It’s not that there aren’t some wonderful restaurants in The Woodlands area. The last decade of growth out this way has brought sorely needed depth and breadth to the food scene here. Research Forest Drive, the Market Street development near The Woodlands Mall and various points in their vicinity have burgeoned with wine bars, sushi, steakhouses, street tacos, gourmet pizza and various takes on New American cuisine.

What we’re still lacking, for the most part, is that “inside the loop” vibe. It’s an aesthetic that’s difficult to put a finger on, but Mark Zientek, general manager and co-owner of The Refuge Bar & Bistro, located on The Woodlands Waterway, has set about the task of bringing that feel to the exurbs. He and his partner Luis Padilla, who also serves as bar manager and sommelier, are putting the finishing touches on their highly anticipated new restaurant, The Refuge Steakhouse and Bourbon Bar, set to open in a matter of days and located in the spanking new Crossroads Square developed by Lake Investment Group and located on Kuykendahl Road at Creekside Forest Drive.

It was during a Duckhorn tasting at Refuge this past summer (see the details here), part of Wine & Food Week in The Woodlands, that I first met Mark and learned about plans for the new restaurant. Last week a few of my foodie friends and I were lucky enough to receive a pre-opening tour of the new Refuge restaurant with Mark as our tour guide, and though there were still many finishing touches left to complete, I could already feel that unmistakeable vibe. 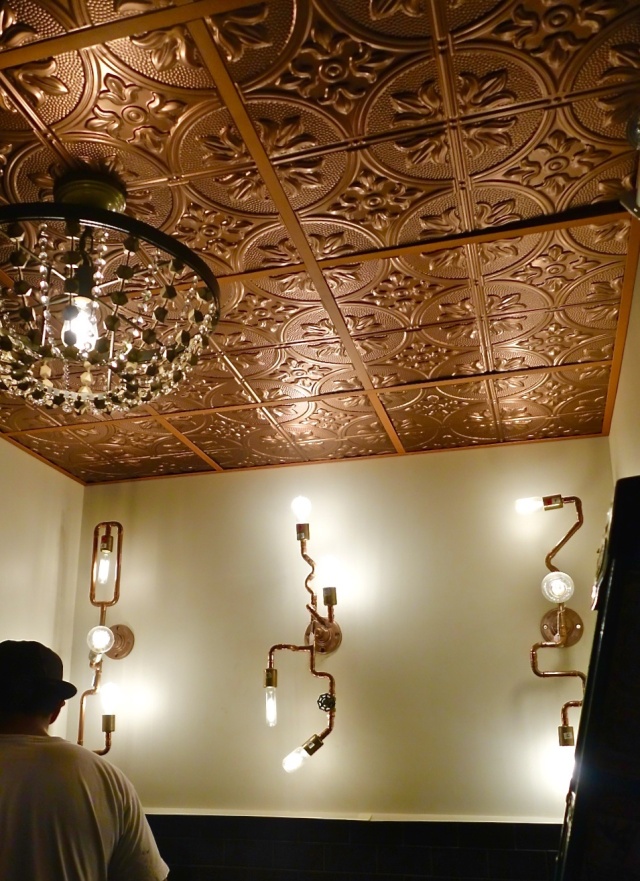 Zientek has a long history in restaurant design and operation and was instrumental in the development of The Club at Carlton Woods as well as restaurant facilities at The Woodlands Resort for The Woodlands Country Club. As he showed us around the mostly finished restaurant interior, Mark’s talent for the “choreography” of the entire dining experience was on full display. The design concept of the new restaurant could be described as “industrial opulence” –stamped copper ceilings, exposed copper pipes, stonework, bare-bulbed lighting and dark leather. A wall of metal bourbon lockers will separate the restaurant entry from the main seating area. There will be plenty of handsome and comfy leather seating  and a private dining room anchored by a large built-in fireplace.

The focal point of the bar is a gleaming copper tower that will provide an array of micro-brewed beers on tap. Whiskey enthusiasts can delight in the knowledge that the restaurant will boast the largest selection of whiskeys in the area and one of the largest in Houston. The floor-to-ceiling windows in the bar area slide back to reveal an inviting piazza with covered seating. You can imagine relaxing here with a craft cocktail and a well-seared ribeye and letting time just roll by, which is likely to happen more often now that a “destination dining experience” is popping up in our own backyard–it’s looking like John and I can scratch the bumper-to-bumper freeway traffic from the evening’s itinerary a bit more often.

The Refuge Steakhouse and Bourbon Bar