Are you Old Vegas or New Vegas? New Vegas is the strip and its immediate vicinity–plush and opulent, shiny and modern, fairy tale and fantasy. But sometimes the glittering exterior doesn’t deliver on the expectation it creates. 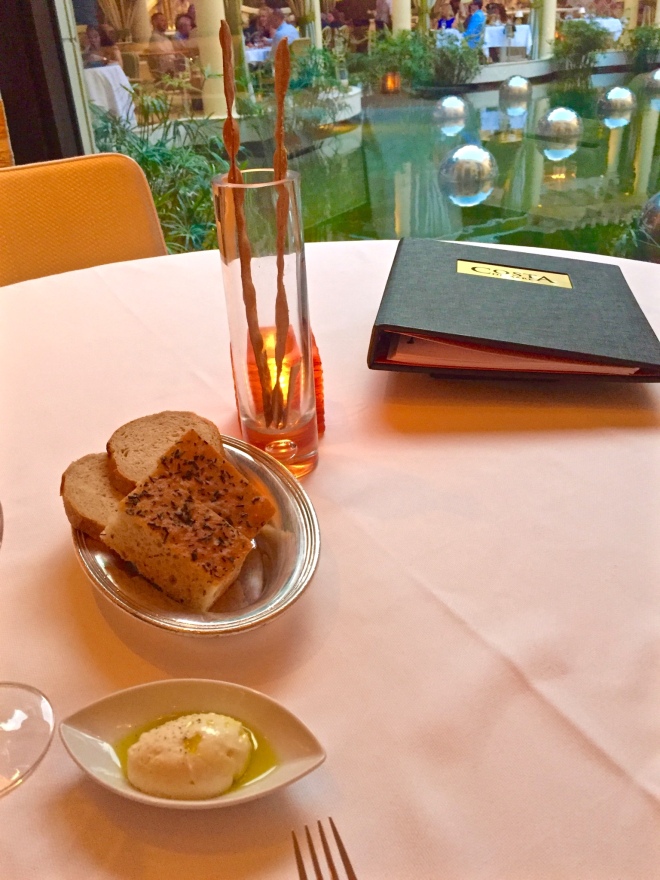 Consider the celebrity chef-owned Italian steakhouse where we made reservations after comparing and cross-referencing a dozen reviews. (The abundance of swanky steak restaurants here means that doing a little homework is advisable, but despite all the planning, things can still turn out wrong.) The sumptuous Old World interior, much of it imported from Italy, set the tone for the evening–“Only the Best.” Yet on our visit, the steaks were overcooked and the service was terse, slow and unapologetic, even though our table of 8 spent a small fortune on food and drink that night.

On a subsequent trip to Vegas, we snagged a table at one of the top seafood restaurants in the city. The floor-to-ceiling windows at the back of the restaurant overlooked a glowing lagoon of floating silver orbs. The waiter whisked to our tableside a gleaming silver cart filled with perfectly iced fish of every shape and size, which only the day before had been frolicking in the Mediterranean.

We decided the extensive prix fixe menu was a good way to sample a bit of everything, and soon the plates started coming. The pasta course was sublime–house made ravioli filled with sheep’s milk ricotta, drenched in pecorino cheese and a delicate Marsala wine glaze. 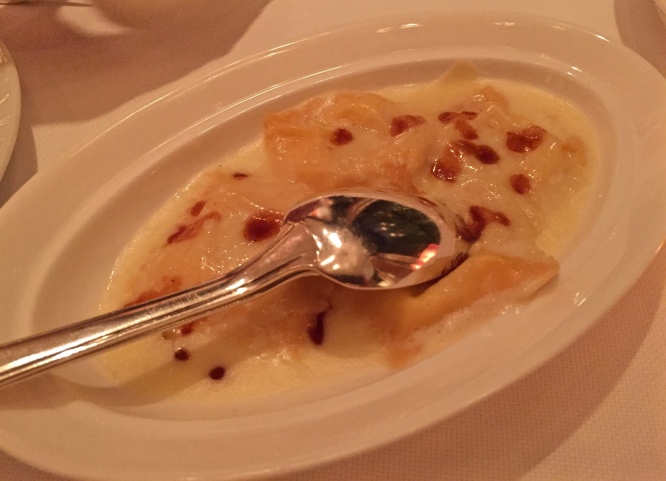 But for all the pomp and circumstance, the fish course was unimpressive. Simply adorned, the freshness was meant to have been the appeal, and yet it tasted, well…fishy. With such extravagant surroundings–and prices–I had expected more.

Old Vegas survives in the movies. Godfather 2, the original Ocean’s 11 and a few pivotal scenes in the 1992 sleeper, Swingers. (“Vegas, baby!”) Who can forget the image of Vince Vaughan and John Favreau playing dollar Black Jack among the senior citizens in the historic The Sands Hotel casino? In a way, the film served as a last hurrah for the old Rat Pack vibe and all the Vegas places that were part of it. (A fitting metaphor for the fading away of Old Vegas on the Strip, The Sands was demolished in 1996 to make way for the mammoth Venetian Resort complex.

Heading down South Las Vegas Boulevard to our dinner reservation, I was surprised to find that our cab driver had never heard of The Golden Steer. (He did, however, seem quite familiar with the dive bar a few doors down.) Before the mega-hotels, before celebrity super chefs, before the booming Vegas club scene, there were places like The Golden Steer Steakhouse. Celebrities, local politicians and high rollers really did– and do–have their own tables here. On a recent visit, the mayor of Las Vegas was seated just a few tables away.

John had the “brilliant idea of the night”–why not start with a couple of steamed lobsters a la carte as an appetizer for the table? Our waiter obliged without missing a beat. The plump shellfish arrived in no time. We sliced them into medallions and shared the plates with our friends, dunking each delicious bite in the warm butter as we waited for our steaks to arrive. 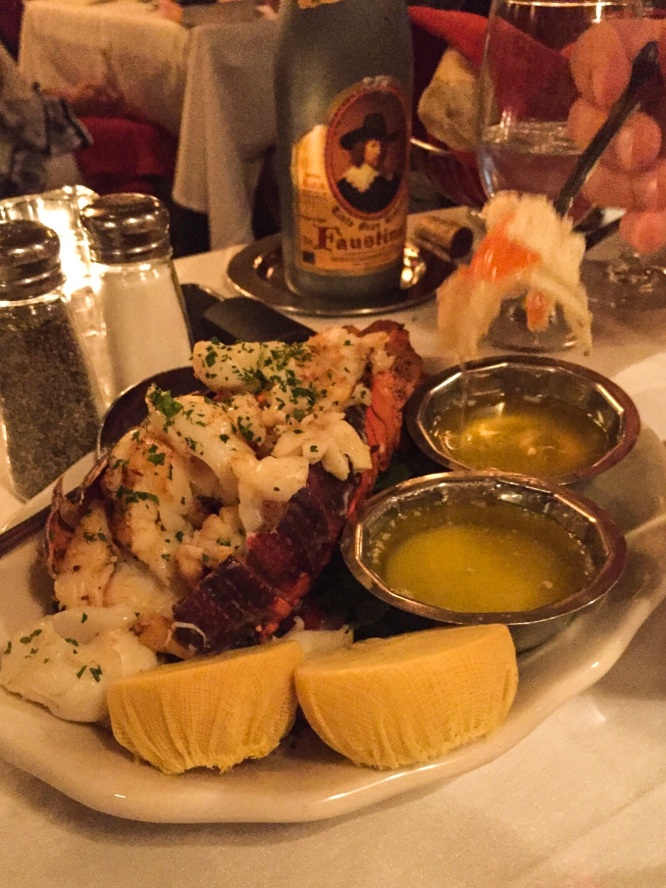 Knowing no shame, we also devoured an Alaskan king crab cocktail. The sweet, meaty chunks of crab needed no sauce or lemon. 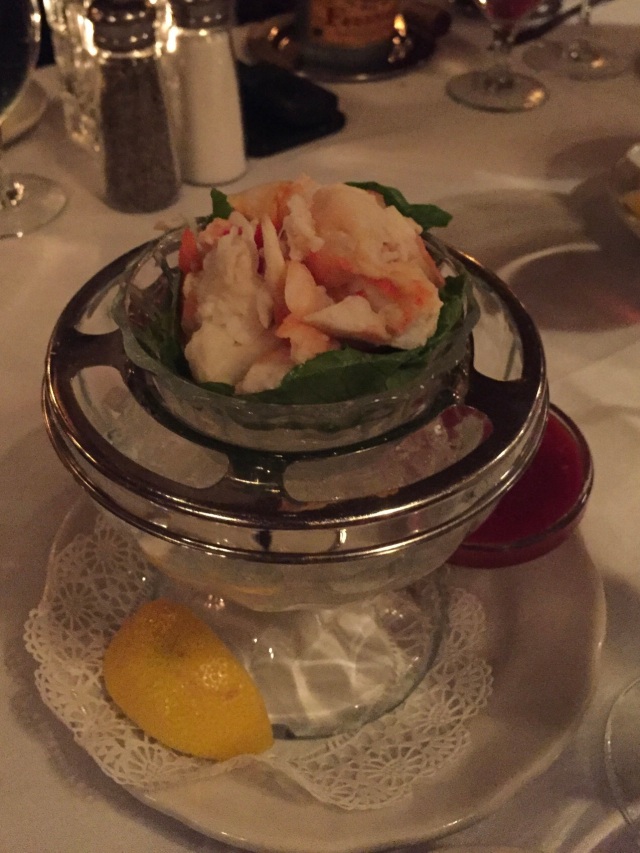 To pair with the beef, we chose a Spanish Tempranillo from the serviceable wine list, which included a respectable number of gems that were pleasing to the pallet and the pocketbook. When our steaks arrived, they did not disappoint. Black and blue, Pittsburgh rare, butterflied medium–here you can feel confident that whatever your preference may be, it’s not going to phase the kitchen, and they’re going to make sure you’re satisfied.

Next time we’re in town, I’ll give the New Vegas dining scene another chance to wow me. (Any place can have a bad night, and I have a list of restaurants a mile long that I’m dying to try.) But I’ll be sure to search out the Old Vegas again too.

And lately a funny thing has begun to happen. That swinging, kitschy Old Vegas vibe is becoming hip again. The last few years have seen a steady revival of the historic downtown area. Artisanal eateries, trendy art galleries and other hipster hangouts are popping up around and along Fremont Street, the heart of the city’s original gambling district, whose iconic casino exteriors have appeared in hundreds of films. Once out of fashion and unloved, these historic buildings are being renovated and repurposed. Everything old is new again.

There’s yet another face to Vegas–sometimes the city’s veneer gets pulled back for a few moments when you least expect it: We hopped into another taxi, headed for The Mirage. The cabbie was pleasant, witty, easy talk to. He said he used to own a successful home theater business. Why was he driving a cab? Turns out he lost everything playing baccarat.