The air was more than brisk as we pulled into the Spring Park Village retail development, north of FM 1960 on I-45. Our destination, the new location of Gringo’s Mexican Kitchen. (Disclosure: I was part of a group invited to a pre-opening event held a few days prior to the restaurant’s official opening. As guests, we were treated to dinner.) You won’t need your GPS to get here. The restaurant has maximum visibility, fronting the freeway service road, near the Spring High School exit, and is awash in the glow of the gargantuan Topgolf entertainment complex, which sits only a few hundred yards behind it.

Not so very long ago, there was a single sleepy shopping center out this way, where Albertson’s and some other tenants languished and met their slow demise. But now, with the Exxon campus bursting forth only a few miles north and the latest leg of the Grand Parkway going in just up the road, this area has come to the attention of some heavy hitters, or maybe you would call them shooters and swingers. First Gander Mountain opened an outdoor megastore and shooting range, and then came Topgolf this past April. With a nearby Starbuck’s, an ATT store and several fast food places in the mix, it was just a matter of time before a casual dining chain took advantage of the retail and amusement synergy. That’s what Gringo’s has done, and if the crowds in recent weeks are any indication, they are doing it well.

Over the years, our experience with Tex-Mex north/northwest of Houston has been hit or miss. Currently there are about a half dozen small places that we frequent. We know the menus inside and out–what’s pretty good, what to steer clear of, and, most importantly, whether the margaritas are any good. There may be uneven service and inconsistencies from the kitchen, but that’s just how it is in the world of inexpensive Tex-Mex dining.

Opening its first location in Pearland in 1993, and now with restaurants across the Houston area, Gringo’s has positioned itself well to provide an alternative. It hits the sweet spot, offering what the smaller joints are not equipped to do, while also besting other Tex-Mex chains in its category with its attention to service, food quality and style. This new Gringo’s store illustrates the point. Decked out with all the bells and whistles, the first thing you notice is the capacious bar area that mixes a bit of upscale steakhouse clubbiness with a bank of TVs that would be the envy of the average sports bar. In one of the dining areas, the mood is set by a massive pair of hacienda-style wood doors. There is extensive booth seating, and overhead, colorful glass spheres provide festive lighting. If you want your Tex-Mex served in plush, attractive surroundings, this place is your huckleberry.

But rest assured, you’re also going to enjoy the food and libations. I’ve eaten at Gringo’s Cypresswood location many times, and this new location again showcases their strengths. How about a top shelf Margarita, one where you can taste the fresh lime juice? How about fajitas that you can rely on to arrive at your table cooked the right way every time? Or a queso, kicked up with chili beef, guacamole and sour cream, addictive enough to eat for an entree? 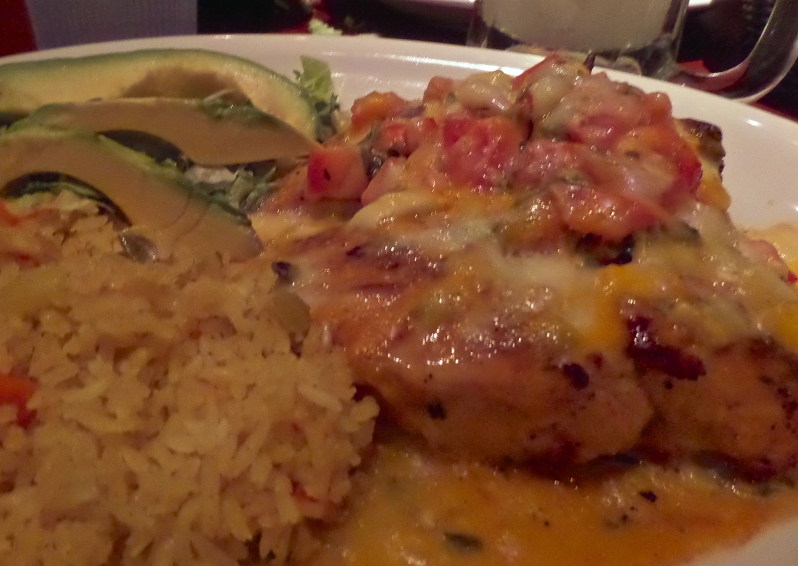 The well-rounded menu offers the requisite classics and updated favorites, along with lighter fare. We sampled the El Capitan plate: beef fajitas paired with sautéed shrimp and crawfish in a rich white wine sauce, served alongside four shrimp brochette which had been stuffed with cheese and jalapeños. Definitely a winner, and the generous portion size could easily feed two people. We also tried the Pollo con Queso, a grilled chicken breast topped with pico de gallo and queso sauce, served with avocado slices. The chicken was tender and flavorful. The sauce, which could have overwhelmed the other ingredients, instead offered just enough cheesy creaminess to bring the dish together.

The night we were there, a seared ahi tuna salad was on the menu. Served in oblong slices and cooked to order, the tuna was accompanied by a mix of salad greens, avocado and jicama, topped with toasted sesame seeds and crispy tortilla ribbons, all dressed with a zingy vinaigrette. This turned out to be one of the favorites of our table. 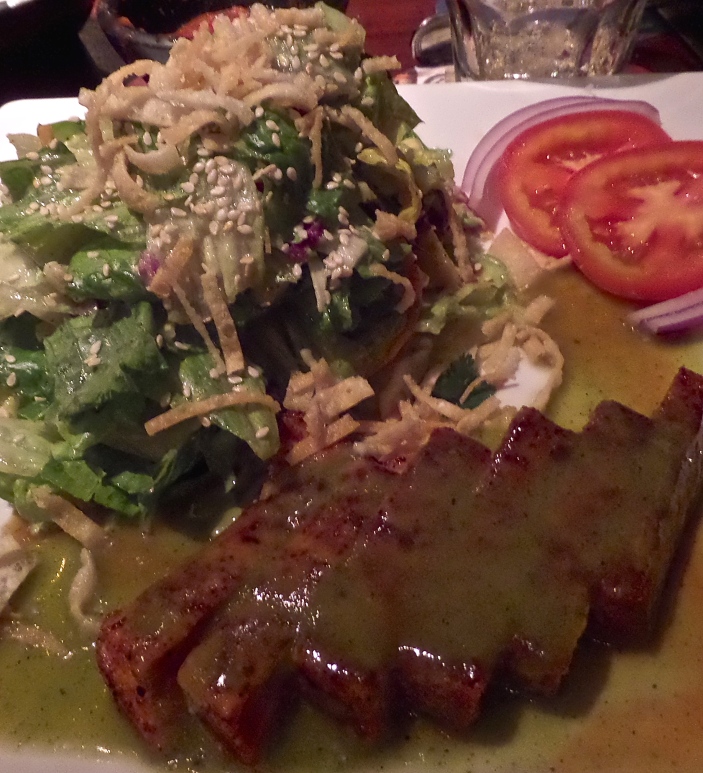 There is nothing that I sampled that I wouldn’t enjoy ordering again. And even on this night, when the staff was doing a trial run in anticipation of the restaurant’s opening the following week, service was attentive and informed. There’s also an outdoor kids’ playground, a patio and a private banquet area. This new Gringo’s has covered all the bases and then some. Prices may be a little more than your neighborhood Tex-Mex joint, but are still reasonable for what you get here. And that’s a pleasure to look forward to on a cold November night.