“You pick your fish, and I will create something, just for you,” says Masa Nagashima, head sushi chef and owner of Masa’s Sushi & Robata Bar in The Woodlands, Texas.  It’s a sunny Sunday afternoon, and I am on my third visit to Masa’s, the latest test site in my search for good sushi.

I am not a sushi expert, but for many years, we have eaten it on a weekly basis, from all sorts of places. And because we eat it frequently, we’ve become a bit finicky. Craving we know not what, but dissatisfied with our current sushi venues, we find ourselves looking for something better.

And believe me, we’re game for anything, sourcing our sushi from every kind of eating establishment imaginable. Not to dwell on our disappointments, but our experiences have led me to compile a list of the kinds of sushi joints from which we now try to steer clear. Maybe you’ve sampled the sushi at some of these types of places too:

Lackadaisical Sushi. Mid-size, upscale, nice decor, a few hibachi tables, but with a primary focus on sushi. Yet, you get the sneaking suspicion that the sushi chefs are not maintaining the rigor they should. Atop my salad greens one day at lunch, I was presented with a plateful of misfit fish pieces, all shapes and sizes, like the leftover scraps from the fabric table at Calico Corner. Not my usual conception of a sashimi salad. Was the chef in a hurry that day? Maybe he thought I would support him in his effort to recycle. Maybe he thought I wouldn’t notice or care. My visits to this place are on hiatus.

Cool Kids Sushi. Large upscale suburban sushi place with a booming techno soundtrack that punctuates your every bite. Walls of chrome and glass, loads of bar seating, a heavy emphasis on happy hour snacks and drinks with clever names. The menu selections are hit or miss. And the service strains mightily to exude that studiously cool kind of vibe you might get at the trendiest places on Westheimer or in Uptown Houston. Well, maybe I’d be more impressed by the vibe if you would just bring my glass of Pinot without my having to ask 5 times. Not cool.

Sushi with a Side of Swagger. Near downtown Houston a few years ago. Literally a sushi “bar,” with a token few tables, helmed by a sushi “dude” who had plied his trade in a few tropical resort cities outside the U.S. I only know this because cool dude spent a lot of time telling me about his many adventures and how much resort goers fawned over his sushi artistry. Apparently, resort goers prefer their inside out rolls (uramaki) drowned in a thick silly string pattern of several sauces that have an unsettling similarity to ranch and thousand island dressing.

Prestige Sushi. Good sushi, competent waitstaff, sophisticated decor—and packed with suburban foodies. Every few minutes, a dozen or so bespectacled sushi aficionados scan the room to take the measure of their fellow patrons. The air in the place is dense with “see and be seen,” like a blanket of urban smog on a hot day. Who wants to breathe smog?

Scary Sushi. Hey, you know that Chinese delivery place down the road? Now they’re rolling sushi too. You can get your moo shu and your kung pao with a side of tuna rolls and whitefish sashimi. Great in theory, but when you open that styrofoam box of sushi that’s been sitting on top of a steaming hot container of vegetable won ton soup in the delivery driver’s car for 20 minutes, you’re going to hear a tiny voice inside your head telling you to turn back now, before it’s too late. You should probably obey it.

In their book, Foodies: Democracy and Distinction in the Gourmet Foodscape, University of Toronto sociology professors Josee Johnston and Shyon Baumann, describe how for many years, sushi was the “exotic Other.” Much of its popularity in the U.S. was initially tied to norm-breaking and status-seeking. But what about nowadays, when sushi is so ubiquitous that you can buy it at Target, heaven forbid? (Let’s see, shampoo, light bulbs, workout pants, and, oh yes, a dozen dragon rolls…) Maybe now that we Westerners have (almost) gotten over ourselves, and the fact that we are eating raw fish, maybe now we can focus on why it’s good to eat.

A place like Masa’s provides the answers. Twice I’ve eaten alongside large parties of Japanese expats, their own personal sets of stainless steel chopsticks in hand, eating, laughing, and enjoying leisurely Sunday get-togethers here. And according to Masa’s wife, Alice, this is the place where the large energy companies and others bring their Japanese work associates who fly in and out of Bush Intercontinental Airport. They swing over to The Woodlands to eat at Masa’s before continuing on to other parts of town.

Why? Alice, who is Chinese, says for one thing, Masa’s Asian patrons appreciate his meticulous selection and preparation of the sushi rice. (Last year, Masa’s Sushi & Robata was judged to have the best sushi rice in the Houston area, according to the exacting standards of the Sushi Club of Houston, the largest organization of its kind in the U.S.) The rice is the heart of sushi. It is made by combining cooked, short-grained rice with a sweetened vinegar dressing. Masa’s shrimp hand roll, or temaki, shows off his perfection of sushi rice to full effect. Each grain of rice is distinct, yet holds together with the others to create a cohesive whole.

Alice is an able and enthusiastic spokesperson for the art of making sushi. She walks me through the lineup of fish displayed at the counter, describing what she and Masa feel the experience of eating sushi should be all about. Done right, it’s a very intimate form of dining. Delicate morsels made with personal style by those who have spent their careers perfecting the form. Alice tells me that sushi is best eaten at the bar, where you are better able to immediately savor your bite-size works of art while all the elements are at their harmonious peak. 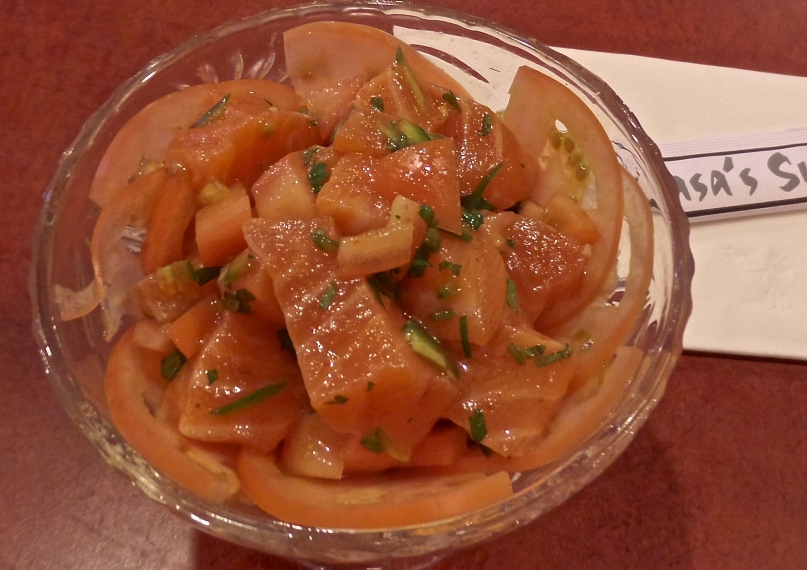 “You pick a fish, and I will create something, just for you.” I choose a basic yellowfin tuna. Masa disappears behind the bar, and I sample several other menu items while I wait for my customized dish. There is a Japanese-style salmon ceviche that for freshness and flavor would be a standout on any Tex-Mex menu around here: chunks of salmon, minced scallions and jalapeno, slices of tomato and a smattering of cilantro. And for my daughter, who can never get enough noodles, the tskukimi: udon noodles in a hearty broth with egg and fish cake.

Masa originally came to the U.S. in the 1960’s as an animal nutrition student, attending college in Nebraska. His father owned a stockyard in Japan. Apparently when he returned home after receiving his degree, he decided that the family business was not for him. His interests were more creative. Masa’s family sent him to Osaka, where he undertook rigorous training under some of the best sushi chefs. He spent years mastering the preparation of sushi rice on his way to becoming a chef. 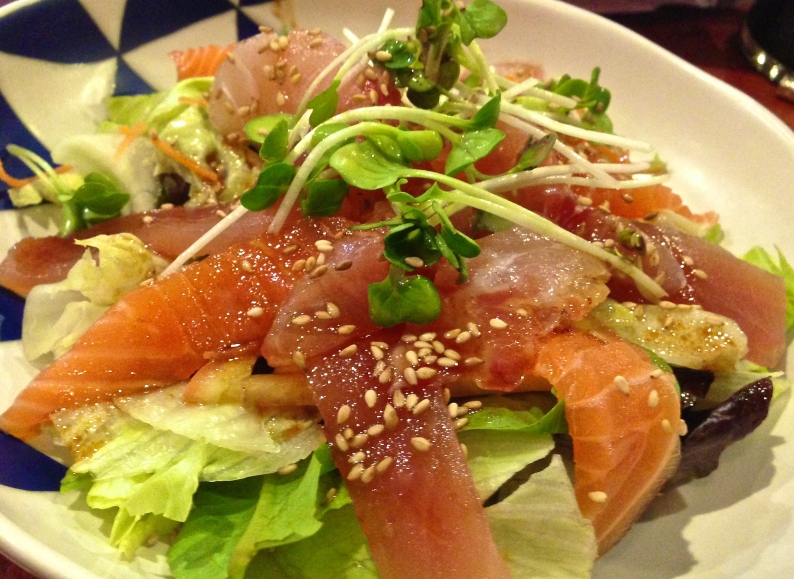 Upon returning to the U.S., he was at first reluctant to accommodate the growing Westernization of sushi that he found in this country. For two years he refused to make California rolls, though he ultimately relented, and soon was coming up with his own creations. Alice says that 30 years ago, he was the first person to put together the roll that today is popularly known as the caterpillar roll, which usually includes imitation crab (kani–kamaboko), avocado and cucumber. And since the opening of his restaurant in The Woodlands a decade ago, Chef Masa has happily created a variety of fusion rolls that pay tribute to just about every neighborhood in The Woodlands. A local favorite is the Cochran’s Crossing roll: tempura shrimp, cucumber and shredded kani-kamaboko, lightly drizzled with a special sweet sauce and a little soy. 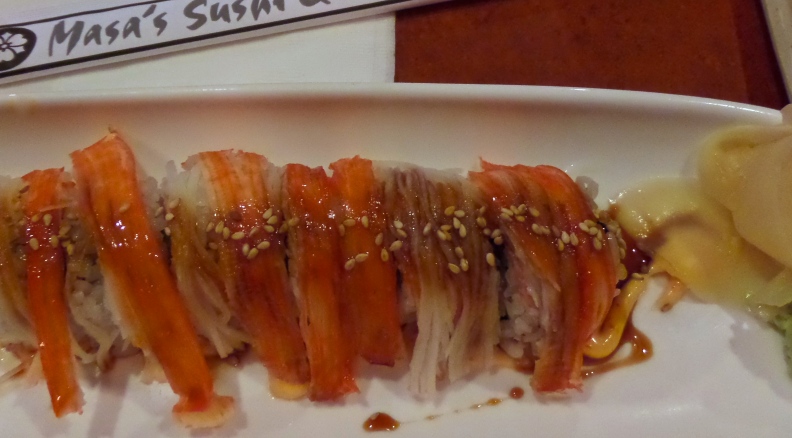 By now, our waiter has returned with Chef Masa’s special dish and a set of instructions: “Masa says roll up each piece with your chopsticks so that the toppings are inside.” He presents me with a simple plate of yellowfin, plump and dewy, nestled on a bed of daikon threads.

Obediently, I roll a piece of fish so that the topping is inside and pop it into my mouth.  It’s a perfect balance of flavors and textures. I eat the whole platter by myself without sharing a morsel.

Masa comes to the table, beaming, and I ask him about the mix of toppings. He gestures, carefully shredding something in the air as he lists the ingredients: black sesame seed, plum, and something else that I could not understand (My first question for next visit!), all grated together, and topped with a sprinkling of finely minced scallions.

That he created something just for our table is not unusual. He says he does it all the time, getting to know his patrons and what they like. Sort of like a bartender who knows your name and your cocktail preferences, but so much better.

Whether you’re into sushi places that are hip-hop or mom-and-pop, cutting edge or traditional, finding the right place, where you can ask questions and experiment with new tastes, is revelatory. I believe our sushi odyssey has come to an end for now. I’ll be back soon when Masa’s gets their next delivery of bluefin tuna. I know my taste buds will be in good hands.