Mild days and cool nights. Our hybrid summer/fall weather this month has been glorious. So on a crisp Friday night, what better way to enjoy the last of the Texas summer sweet corn than with a transitional dish that showcases the freshness of local corn—an easy shrimp maque choux stew. This is a heartier, richer variation of the traditional skillet corn that is a common side dish in Louisiana and other parts of the south. The name maque choux may be of French origin, or Native American, or both, depending on who you talk to. And actually, our family made plenty of skillet-cooked fresh corn when I was growing up in Louisiana, but we didn’t call it anything at all. Except delicious.

This is an adaptation of that simple corn dish that many of us grew up eating. I’ve added seafood stock and small shrimp so that it can be enjoyed as a main dish with a leafy green salad. It makes a big batch of stew, but you can easily halve the recipe to serve around 6 people. 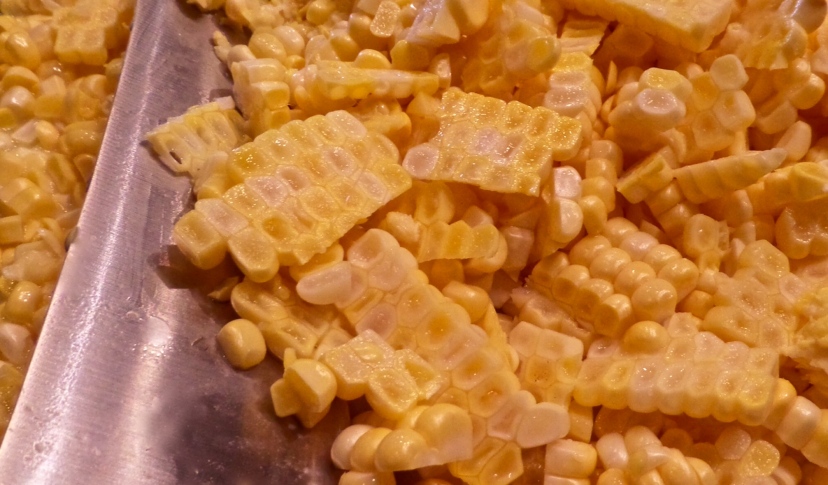 It takes a little prep time to get the corn ready for maque choux, but once you get into the rhythm the process goes quickly. After you shuck and clean the corn, it’s time to remove the kernels. This is my method: place an ear of corn on its end in a very shallow roasting pan or on a cookie sheet with a small rim. Using a heavy, sharp knife, slice downward, from top to bottom, shearing the kernels from the cob. After you have cut away all the kernels, repeat the procedure, this time with the bare cob. Again, work from top to bottom, applying gentle pressure and scraping downward to get the “milk” from the cob, which will add flavor to the dish. Repeat with each ear of corn, collecting all the kernels and milk within the confines of the roasting pan.

Dice the “holy trinity,” the familiar mirepoix of onion, celery and bell pepper that is foundational to many traditional Cajun and Creole dishes. (For added color and depth of flavor, I used both green and red peppers.) Finely chop a whole head of garlic. Or, if you are “pressed” for time, use your garlic press.

It’s important to use a good andouille sausage or tasso ham in your maque choux. If you’re in south Louisiana, this is no problem. When you live elsewhere, finding authentic Cajun smoked meats can be a dicey proposition. One of my favorite meat markets is The Best Stop in Scott, Louisiana, just outside of Lafayette. Best Stop has some of my favorite smoked boudin and a nice andouille. Unfortunately, I haven’t made an I-10 road trip since early summer, and we have exhausted the stash of Best Stop delights that I hoard away in the freezer.

Thankfully, a reliable, Louisiana-sourced andouille has found its way into quite a few grocery stores in Texas and elsewhere. Savoie’s is an Opelousas, Louisiana-based company that has a heritage of making authentic Cajun meat products. They’ve got a base for making rice dressing (a.k.a. dirty rice) that you can just heat and mix into cooked rice. It’s good stuff, miles better than the “for looks only” mound of tasteless stuff that comes alongside your entree at some Louisiana-themed restaurants in Houston and elsewhere. 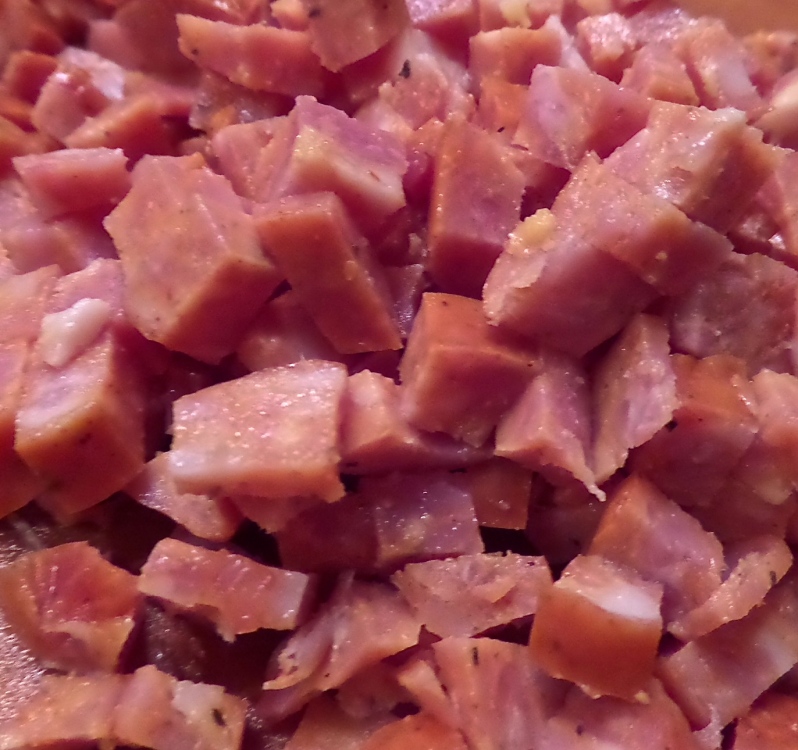 Andouille is a medium to coarsely ground smoked pork sausage, full of Cajun seasonings and garlic. It doesn’t fall apart or lose its flavor during extended cooking, as some sausages do. Savoie’s link has a medium marbling and a smoky heat that is assertive without overpowering the other ingredients in your dish.

Most traditional maque choux recipes will tell you to use bacon grease to cook down your vegetables and andouille. You can’t beat it for flavor. But this is where I make a concession to health consciousness and use a good olive oil instead. You will have to make the call, because bacon grease is a pretty heavenly cooking medium, even though your arteries may disagree.

I use my trusty and gargantuan 12 quart cast iron Dutch oven for cooking gumbos, beans, jambalaya and stews. Cast iron really does make a noticeable difference in the way your dishes taste, and nothing is better for cooking low and slow. Southern food author John T. Edge, as quoted in the Southern Foodways Alliance Southern Food Primer, describes the way cast iron can uniquely “absorb and impart flavor” from years upon years of use, in effect, holding and sharing the history of generations of regional cooking. I’ve heard that cast iron cookware was so important to American colonists and pioneers, including the French Acadians who immigrated to Louisiana, that prized pots and pans were passed down from one generation to the next. It’s still true today. When my dad inherited his grandmother’s cast iron, he gave me his big ol’ pot, and I love it. 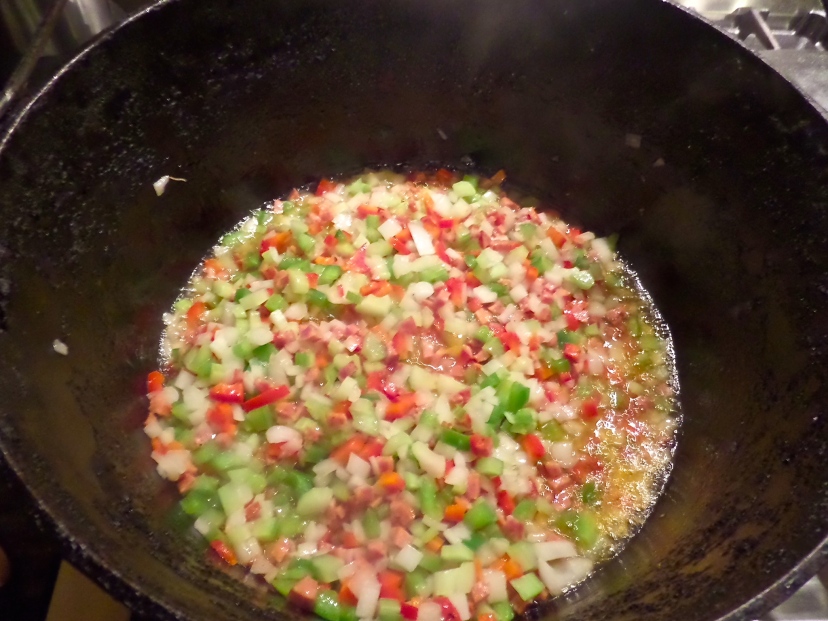 Cook the onions, peppers, celery, andouille and corn over medium to medium-high heat until the vegetables are wilted and and the corn softens a bit, about 10-15 minutes. Then add the tomatoes, tomato sauce, chopped fresh parsley and thinly sliced green onions. Cook these over medium heat for about 15 minutes. You can stop right here if you would like to serve your maque choux “as is.” To serve it as a stew, add seafood stock until you have created a soup-like consistency.

Return the pot to a robust simmer or low boil. Add the shrimp, and cook until just done, not overcooked, about 4-5 minutes. Then mix corn starch and cold water. Slowly add this paste to the corn mixture, stirring well to avoid lumps as the stew liquid thickens. Remove from heat, then salt and pepper to suit your taste.

Ladle the stew into a wide, shallow bowl. (I added a heap of minced chives from the garden and a few slices of a good baguette before digging in.) This dish pairs well with one of the drier French rose wines. My current favorite is the highly rated 2013 Bandol Domaine de la Bastide Blanche. Made from Mourvedre as well as Cinsault and Grenache, this easy-to-love, fuller-bodied, dry rose offers juicy red fruit and peach notes, a slight minerality and a long, smooth finish that complements seafood stews and Provençal-style cooking. 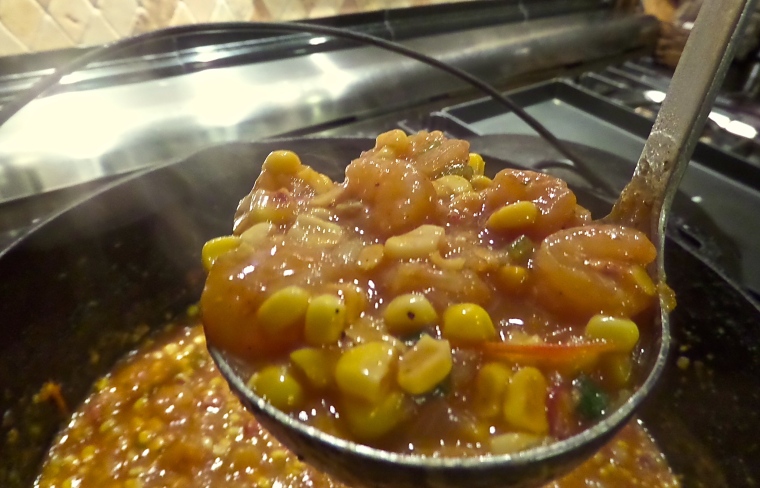 Now that the cooking is done. you have laid the groundwork for a cozy movie night or a gathering on the patio with a good friends. Have a bottle of Louisiana-made hot sauce on hand to season your steamy bowl to taste.

It’s a hearty meal for the first cool days of fall using the last sweetness of summer. Enjoy this dish while our lovely weather lasts and while you can still find a little good, fresh corn at the farmers market or grocer’s.