We took the city’s public transit rail, a.k.a., the Sky Train, through downtown to Granville Street, cutting through Yaletown once again, on our way to the southern edge of the city. Unexpectedly we came upon a local festival in full swing. 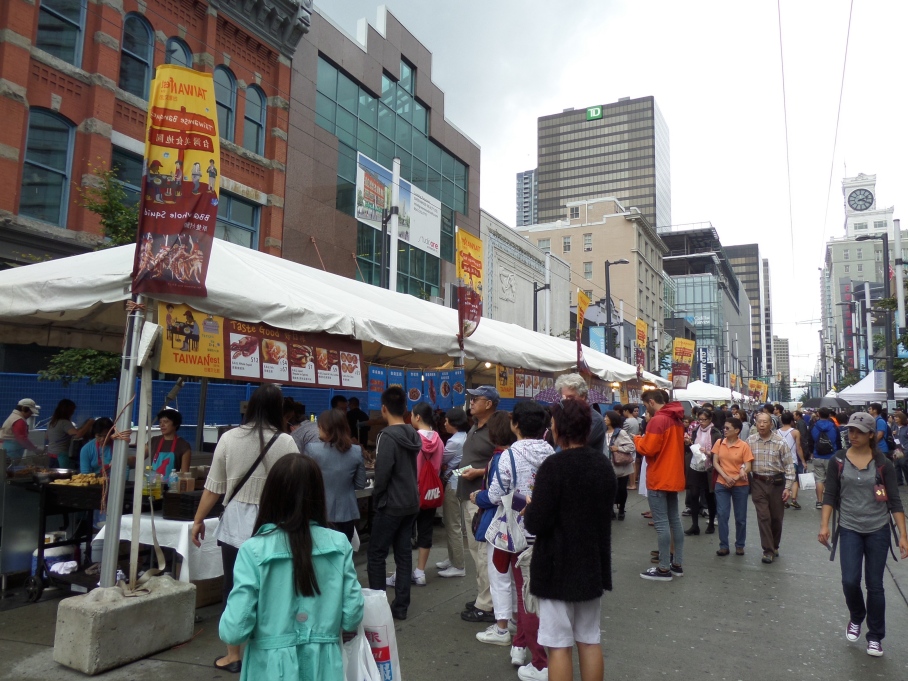 Vancouver is one of the most culturally and ethnically diverse cities in Canada. Along with a historical heritage of English, Scottish and German immigrants, you will find Greek, Italian, and Japanese neighborhoods, as well as a sizable Punjabi community. But by far, the tremendous growth in Chinese immigration over the last few decades has made the most significant cultural impact on the city. 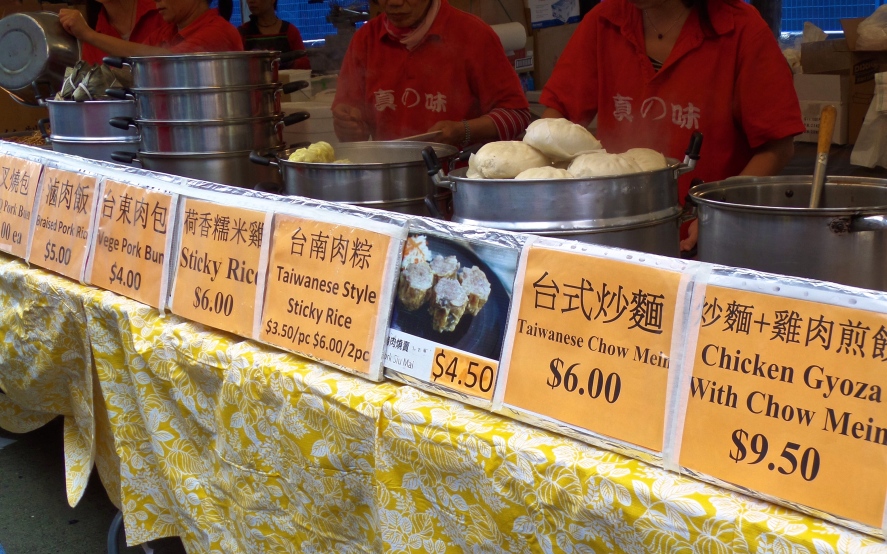 The annual TaiwanFest celebration here draws huge crowds and features food, dance, music and art exhibits.  Food tents lined the streets the day we were there, with all kinds of traditional Taiwanese delights hidden under those steamy lids, just waiting to be sampled by our hungry crew.

There was squid, grilled or fried, steamed barbecued pork buns, oyster omelets and the Taiwanese take on chicken nuggets. Too many choices and lines too long to get to them all. So we honed in on the squid.

While it was cooking on the open gas grills, the squid was painted lightly with a coating of spicy sauce. You could get more ladled over your plate, if you wished.

Some people are a bit put off by the chewy texture of squid and the whole “visual” component–the tentacles, the suction cups. I get it. But for some reason that doesn’t bother me–maybe it’s because I grew up eating a lot of Louisiana frog legs, the occasional turtle stew, a little alligator tail…

Squid has always been a favorite of mine when we’re out for Japanese or hitting the local Mongolian stir-fry place. The grilled version we had at TaiwanFest beats all those places, hands down. If you’re not already a squid fan, you might change your mind after trying it here. 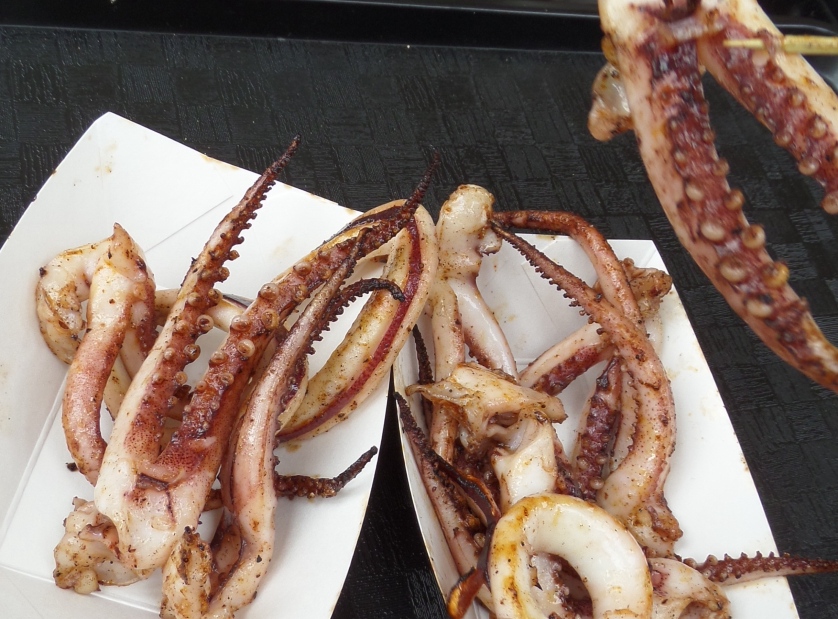 Our snack from the street vendors only served to make us want more. And that was okay, because Vancouver is a great place to find good, inexpensive dim sum. We walked a few more blocks and ducked into a small place with an inviting menu. We started with hot tea and and an order of Mandarin wonton soup, its deep broth enriched with spinach and seaweed. 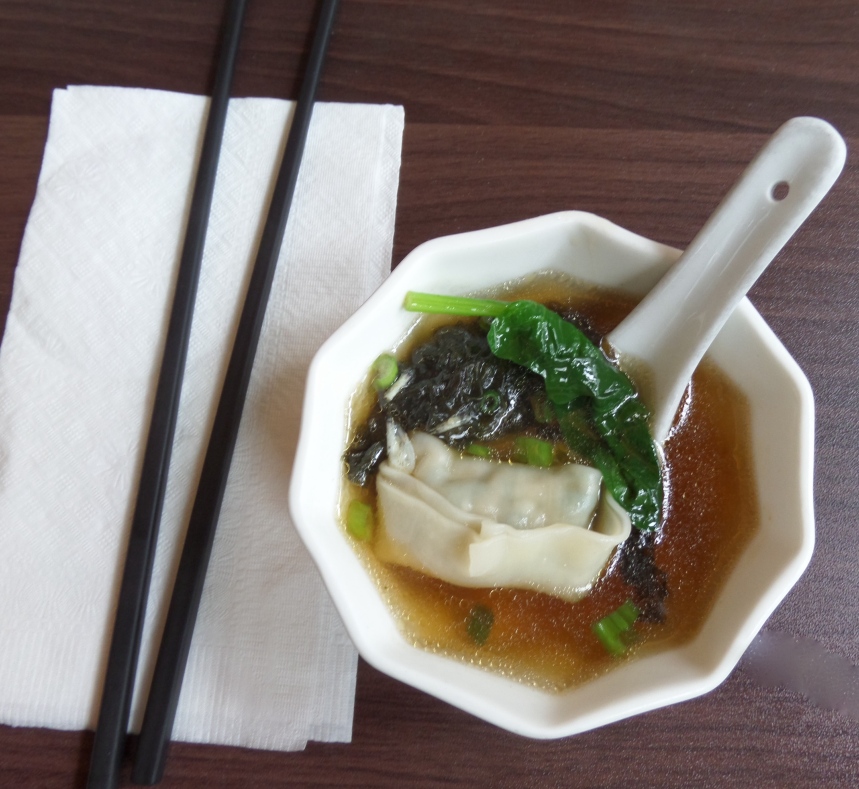 A popular dim sum item in many restaurants is xiao long bao, a type of steamed bun commonly referred to as a “soup dumpling.” Ours arrived at the table looking like plump little nesting hens, all crowded together atop a bamboo steamer insert. To eat one, you can use your chop sticks to carefully place the hot, wobbly dumpling on your dish, season it with Chinese black vinegar or soy, then take a careful first bite. You’ll feel the thin outer skin give way, then a startling gush of warm, savory broth. Left in its wake is an equally tasty pork filling to enjoy in your remaining few bites. 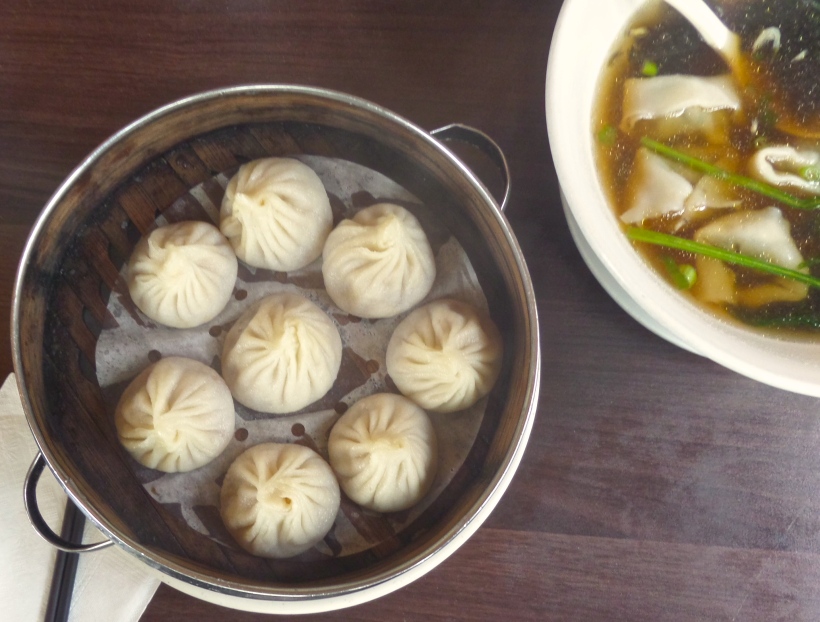 The xiao long bao was excellent, but my favorite dish was the Sichuan hot chili wonton and stir-fried “Chinese spinach” plate. (This appears and tastes to be the same addictive green I have sampled in Guangzhou and other places. I believe it’s called choy sum, but maybe one of our readers will know for sure.) The pork wontons, shaped like miniature warheads, were a fitting visual metaphor for the nice blast of heat I got from the hot chili oil that seasoned this simple yet appealing dish. 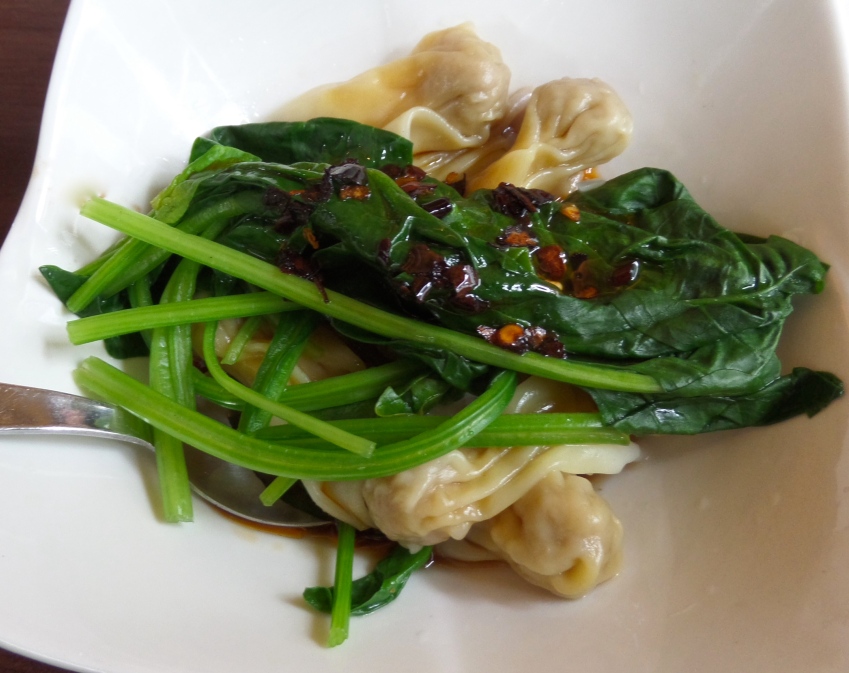 Now totally re-energized, we continued our trek to find the southern waterfront. Reaching the Yaletown Dock, we hopped aboard one of the small ferries and taxied across False Creek for a visit to Granville Island. The trip takes all of about 7 minutes, and provides a panoramic view, looking back across the water at the striking Vancouver skyline.

The Public Market on Granville Island is impressive both for its size and variety. You could spend hours winding your way through the maze of tables and stalls.

In the large farmers market, bins were spilling over with ripe berries, citrus, grapes, tomatoes and peppers. I could have spent the whole afternoon taking pictures of the produce, drinking JJ Bean or Petit Ami coffee and sampling homemade maple butter and baked goods. 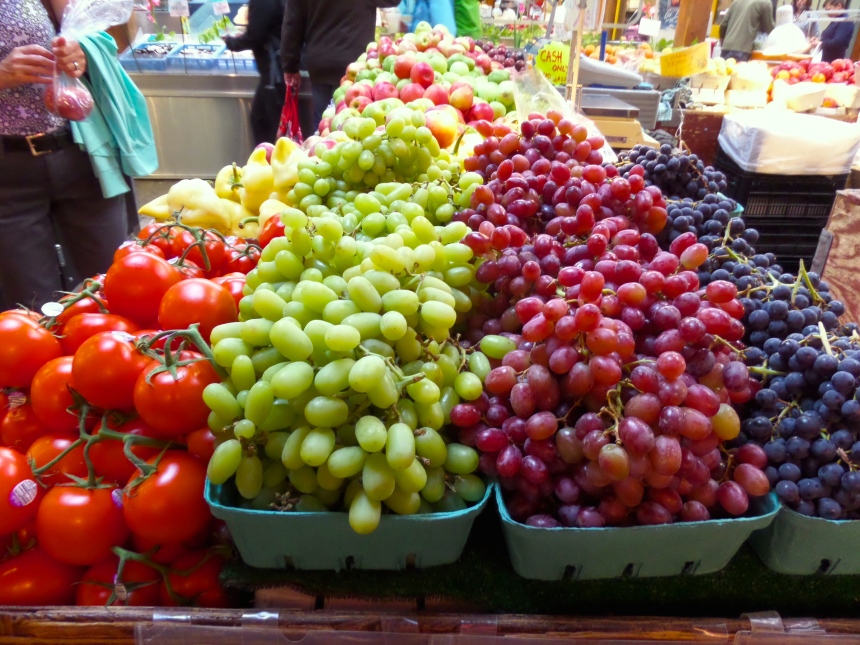 At the Granville Island Public Market you can also find local oysters, mussels and fish on ice, and lots of prepared foods made with locally sourced ingredients. Vendors like well-known Duso’s Italian Foods and Zara’s Italian Deli and Fresh Pasta keep the crowds queuing up for homemade pastas, salads, olives and charcuterie.

We were tempted to buy cheese and sausage and wine, then picnic somewhere close by. In particular, the range of goat’s milk and sheep’s milk cheeses looked amazing.

We didn’t follow through on the picnic idea, but we did stop by the Granville Island location of Liberty Wines, a well-known Western Canadian private chain of wine stores. There we stocked up on B.C.’s highly rated wines from Okanagan Valley and Similkameen Valley. So how many bottles are allowed in a checked suitcase?

Our bags filled with souvenirs, wine and food. we hopped another ferry and headed back into downtown, this time making a pitstop in Gastown for a few drinks at an Irish pub. This is the original downtown core of Vancouver, which sprang up around the first saloon, built in the late 1860’s by a character known as “Gassy Jack” (a very talkative, or in the parlance of the day, “gassy,” fellow). Nowadays the quaint cobblestone streets and historic buildings serve as counterpoint to the fun and funky clothing shops, art galleries, pubs with live music, hip cocktails bars and restaurants. 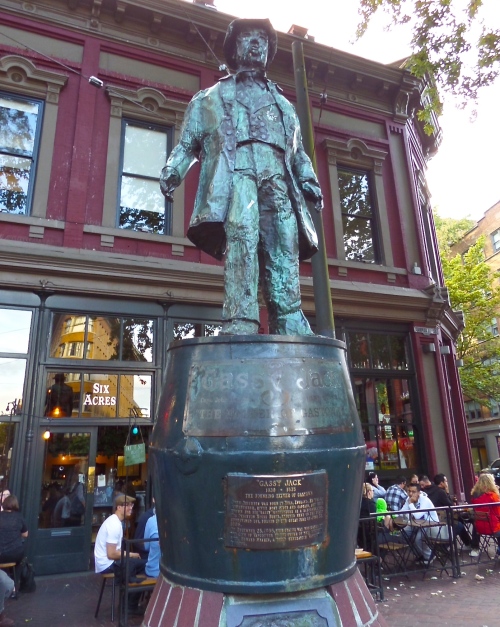 The next day, our last in Vancouver, we decided to play it low key, heading west, past the beachfront community of Kitsilano, to the University of British Columbia and its world renowned collection of first nations art and objects at the UBC Museum of Anthropology.

Here we found an amazing collection of ancient and present day totem poles, ceremonial masks, intricately woven baskets and other treasures. This immense collection is focused on indigenous Pacific coastal tribes, but also includes artifacts from cultures the world over.  We intended to whip through the museum for a few quick pics, but ended up staying a few hours. There is so much to see here! 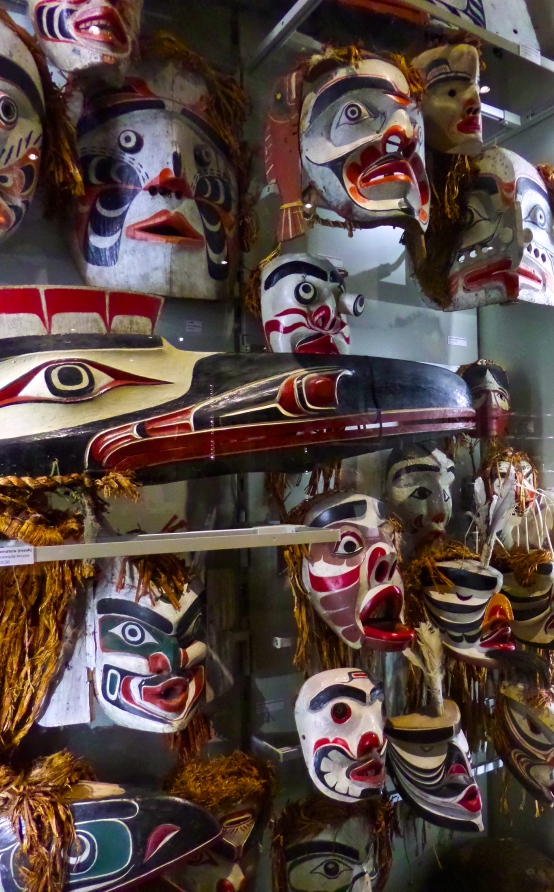 The museum is perched on a cliff at the edge of the Strait of Georgia. You can walk around in the museum’s “backyard” and see full-size Haida houses and totem poles, along with the breathtaking view of the mountains across English Bay.

Later in the day we stopped for a couple of craft cocktails at the Lobby Lounge and Terrace in the Fairmont Pacific Rim. Very sophisticated surroundings, live music and the hotel’s raw bar made this the the perfect place to kick back and people watch for a while. We then hailed a taxi for our final destination of the trip, Stanley Park, where we hoped to take in a few sights and snap a few photos at one of the world’s largest urban nature parks before heading on to our evening reservation at a restaurant located inside the park. Our cabbie was so kind and helpful. He stopped the meter to walk us to a well-known scenic location for photographs, near the park’s pavilion. From this popular lookout point, we could see Lion’s Gate Bridge, heading into North Vancouver (not to be confused with Vancouver proper, of course…or Vancouver Island, West Vancouver, North Vancouver, or Vancouver Bay. You’re going to want to have your favorite map app handy when you visit.) 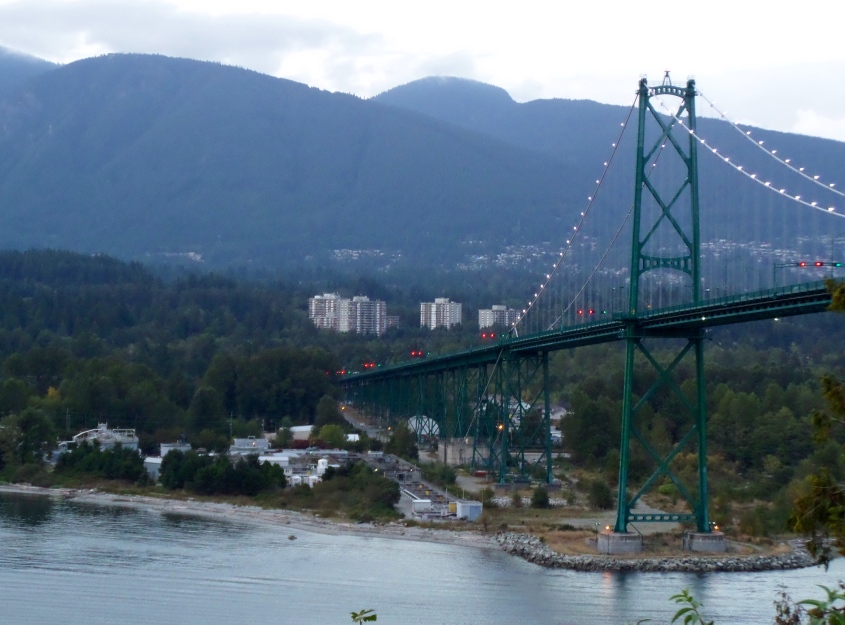 As the sun began to set, we took in another breathtaking British Columbia view.

Before our cabbie pulled away, he reassured us that the restaurant was, “just down there.” And then he was gone…

Ever walked alone on the side of a road, in the dark woods, with virtually no cars passing by for 30 minutes–in nice clothes? You start to get that creepy sensation that turns a bunch of harmless trees into a cross between the Haunted Forest in The Wizard of Oz and a scene from The Blair Witch Project.

You know you’re desperate when you’re using an iPad to light your way. Thank goodness we were laughing uncontrollably, or things could have seemed a little grim. We finally made it to a curve in the road and, like a deep woods oasis, our restaurant suddenly appeared.

A shout out to Jim, the manager at the Teahouse in Stanley Park, who held our reservation, though we were pretty darned late. The attentive service and the well-prepared, upscale menu of local standards and seafood favorites (as well as the sympathy) were just what we needed. The Teahouse is located at Ferguson Point, the very western tip of the park. I hear this is the place to go to experience the most magnificent sunset view in the city. (Somehow we missed that.)

We still can’t figure out if our taxi driver was confused or just felt he had spent too much time on us, but either way we’ve got a good story to tell now that we’re back home. All-in-all, our visit to Vancouver was full of outstanding food and world-class sightseeing. As is the mark of a great destination, this city still holds much more to explore on a return trip.