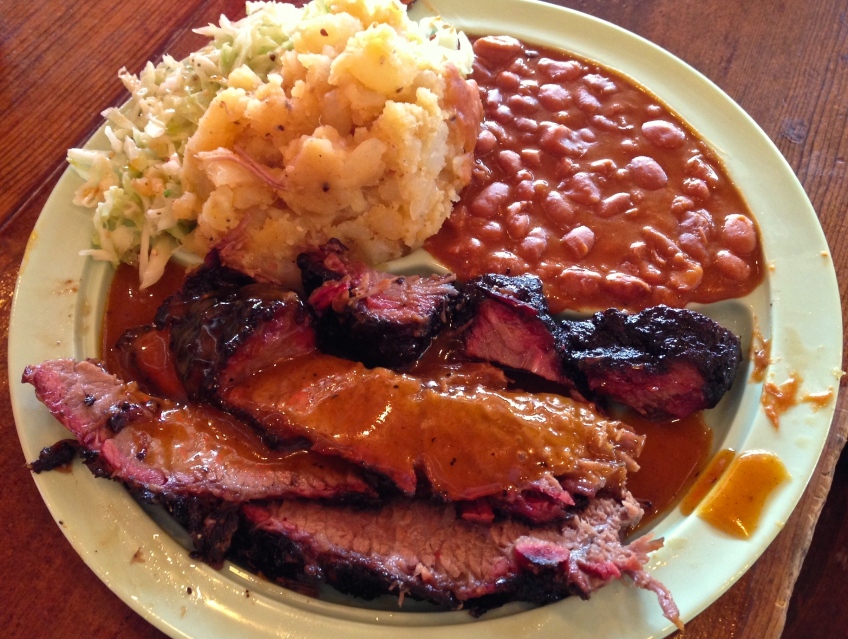 A question that is music to my ears: Would you like lean, fatty or burnt ends?

It’s not by choice that I love smoked brisket. Apparently I was born this way. Or maybe all that meaty smoke just overwhelmed my taste buds when I arrived here from Louisiana years ago.

Some of my favorite blog reading is focused around my obsession with brisket and Central Texas barbecue. These barbecue bloggers know their stuff, and they’re a great place to get advice about the best places to eat and why. Their blog names give you an idea of what their posts are like: Don O’s Texas BBQ, Texas BBQ Posse and, my favorite blog name ever, Man Up: Tales of Texas BBQ. These are the true believers, the aficionados who were chewing the fat (literally) before the recent national fame of Franklin Barbecue in Austin made Central Texas smoked meats trendy to ponder. For years, these guys have put in the miles, taken the detailed photographs, broken down their experiences into spreadsheets and charts. Some of them write for a living, some of them are just dedicated, regular dudes. They all seem to spend the bulk of their spare time criss-crossing the state on their own time and dime, searching out the best Texas ‘cue. 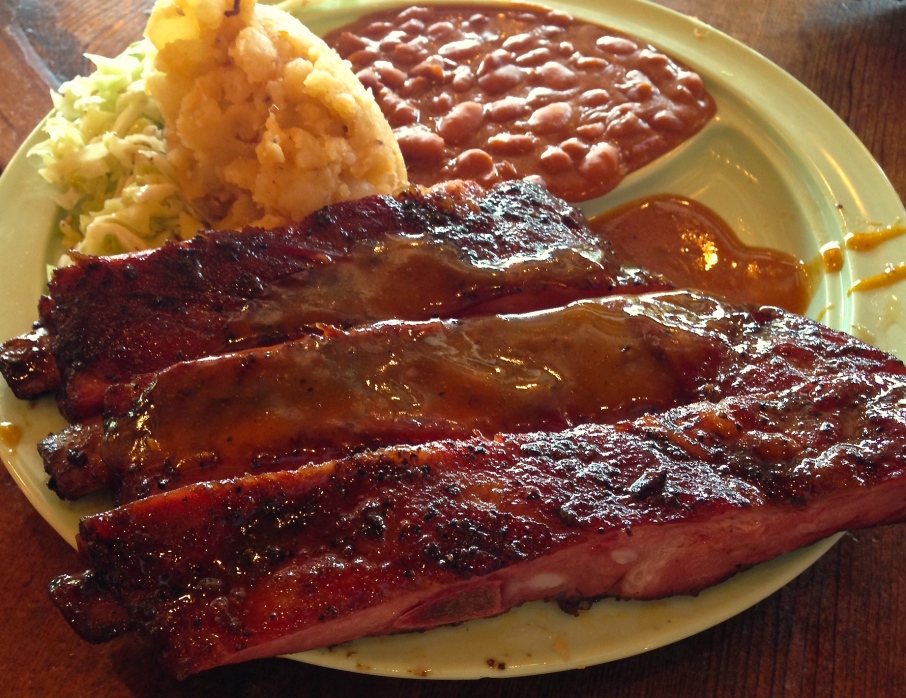 One of the bigger debates on these sites is what qualifies or disqualifies a place from being an authentic barbecue joint. It is, for example, considered to be an apostasy to use gas-fired smokers to cook your meat and then merely “finish” with wood smoke for a few hours. True Central Texas barbecue is cooked, from start to finish, with wood smoke, usually “low and slow,” as the oft-cited barbecue mantra goes. And if your joint is only open for a few hours one or two days a week, there are some who say that yours cannot be considered a real barbecue joint– if you don’t have to crank out a consistent product day in and day out, you can afford the time and attention to be “Michelangelo” with your meats. Can’t stand the heat of criticism? Then you’d better back away from that pit and hand those tongs to someone else. The deliciousness and integrity of an entire genre of revered cooking and eating is at stake here.

Recently, my husband and I headed out to Duchman Family Winery in Driftwood to do a weekend tasting. (Check back soon for the upcoming post.) There’s a well-thought-of, upscale Italian place right next door to Duchman, but with not a thought as to the possibility that I would want to eat lunch there, my husband instead drove to The Salt Lick Barbecue, just minutes from the winery. I had never been to The Salt Lick, and he knew without even asking that I would want to check it off my “list.”

Started in the 1960s and built on family ranch land, The Salt Lick is a landmark in its own right. A lot of my favorite barbecue dudes think The Salt Lick is good–good, that is, when you need a place to take visitors from out-of-state who want to experience a little Hill Country ambience and eat barbecue at the same time. It’s a handsome property, and the owners have a talent for getting the most out of it. A massive, winding eatery, well-choreographed to hold hundreds of people with minimal wait time. There’s even a vineyard on the property and a “cellar” where you can sip The Salt Lick’s private label wine. (Yes, they have covered all the angles here.) 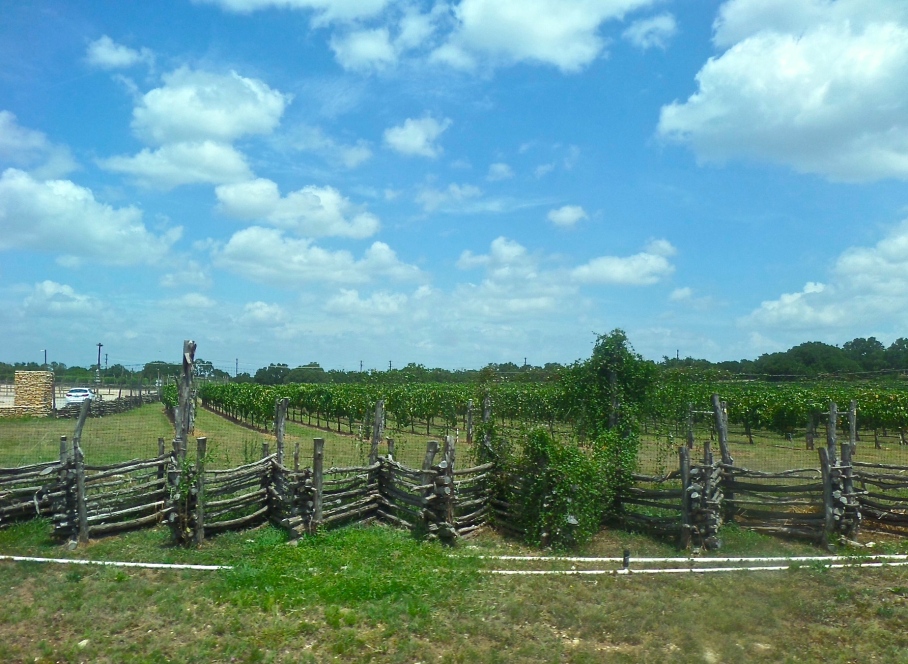 The rustic collection of limestone buildings is spread among the twisted oaks. There are twinkling strings of lights all about. The service is prompt and friendly.

I know I am just a barbecue-loving amateur, but I have to say that my brisket was absolutely great, a combination of well-rendered fatty cuts and flavorful burnt ends that were the hit of the table. The Salt Lick likes to paint a little of their unique, mustard-based sauce over the meats throughout the smoking process. (True Central Texas-style smoked meats are not cooked with sauce.) They also appear to add another little splash before bringing your plate to the table. I look forwarding to eating the brisket there again, sans the extra sauce. 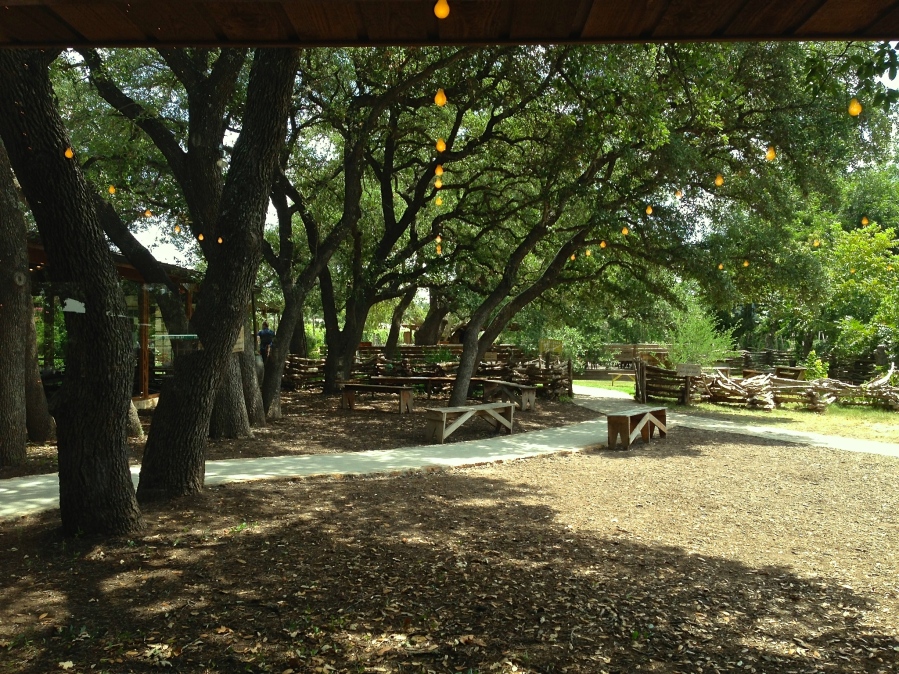 Go to the Texas Monthly’s excellent barbecue blog, TMBBQ, and skim the FAQs. You can read between the lines and almost hear the haranguing they get no matter which places make it onto their star-making list of “The 50 Best Barbecue Joints.” Their site mentions one reader who apparently stated that all REAL Texans knew of some small, under-the-radar place in their own community that was just as good as any of the ones on Texas Monthly’s venerable list. He didn’t name any examples, so what did he really mean to say? I think I know:

The best brisket I ever had was smoked by the local Masonic lodge in Klein, Texas, a several-times-a-year fundraiser. Put your name on the list, order a whole or half brisket. It was smoked right next door to where I worked, and the smell permeated the air the day the day before it was ready. A whole herd of briskets lined up in a humongous smoker that was attached to a flatbed trailer for easy transport. They were delivered to my workplace, each wrapped in smoky, crinkled foil, with a crust so perfect, dark and crispy that I could barely keep from gnawing on it during the drive home. You can’t put that on a top-50 list.

I’ve made the pilgrimage to a respectable number of the tasty places on that Texas Monthly list, but I have many more highway miles to log before I can say that I’ve really made a dent. Right now, of the place I have tried, City Meat Market in Giddings and Kreuz Market in Lockhart are two of my old-school favorites. Which brings me to another barbecue debate.

Texas barbecue is “in”–it’s cool to be in-the-know about burnt ends and smoke rings. And now, not only are some of the most critically acclaimed Hill Country barbecue joints no longer in the “country” (Some of the best newcomers are in Austin, Fort Worth, Dallas and Houston.), a growing number aren’t even in Texas. New York City, Brooklyn, San Francisco, Seattle. It’s a brave new world in Central Texas-style barbecue, and you’re going to have to find your own way forward, my friend…

On one of those popular national food and dining discussion boards, a user recently posted a common question with a common preface: …coming to Texas on a business trip…will be in the vicinity of San Antonio and Austin…only have time to hit one place. Where should I go to get a real Central Texas barbecue experience? The heartfelt response was around 5 paragraphs long. (Maybe it was one of the “Man Up” guys). The well-reasoned reply basically said:

If you want to know what Central Texas barbecue is all about, you need to go to the places where it first came to be, the “heritage” meat markets and bbq joints that dot the Texas Hill Country and are the living history of how this style of barbecue began. Rather than eat one big meal, get a small sampling at more than one of them. And you need to save the other places, those in-the-media, newer places, for your next trip.

You’ll be glad you did.