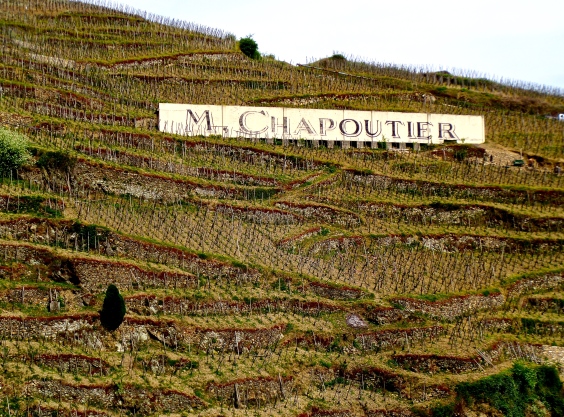 A trip to Lyon meant that I was within striking distance of a Rhone valley wine tour.  What luck!  Southern Rhone wines had become some of our very favorites back at home in Houston, where lately we were discovering the world of Cotes du Rhone, Vacqueyras, Gigondas and Chateauneuf du Pape at our neighborhood Spec’s in The Woodlands, which has a very well-rounded selection of French wines.  I emailed Kanpai Wine Tours, a recommended, Lyon-based tour service, headed by Lyon native Olivier Delalande.

“It would be a pleasure for me to give you the tour to the NORTHERN Rhone Valley,” was the email reply from Olivier.

My jam-packed travel itinerary would only allow for a half day of touring, so the southern Rhone was not logistically possible.  Bummer!  I was not very familiar with wines from the northern Rhone.  Ecstatic to be tasting wine anywhere in France, I made the necessary arrangements.

I met Olivier and the seven other members of our group at noon the next day outside L’Office du Tourisme in the massive city square known as Place Bellecour.  We boarded the tour bus and headed south.  Our first stop was a hilltop chapel in the village of Vienne, just 32 km from Lyon, offering a panoramic perch from which to view the Rhone River and the surrounding countryside.

From Vienne we headed to the tiny village of Ampuis, driving through the village and into the heart of the steep slopes where wine grapes have been growing since the Romans ruled this part of France. The vines were just beginning to sprout their leaves.  Almost all of the grapes grown in this region are Syrah and Viognier.  In fact, no other red grape is allowed by law except for Syrah, which is indigenous to the Rhone Valley.

Unlike some chateaux in Bordeaux or wineries in other regions of France, the slopes of the northern Rhone are mostly held by the same families from generation to generation.  Allowing outside wine tours to stop by and “sample the wares” is a newer phenomenon in this small sub-region.

“Here a winemaker invites you to taste,” says the sign below. It is posted prominently next to the entrance of the friendly tasting room of De Boisseyt-Chol, which has produced wines on the same rugged hills here for over two centuries.

The production area at de Boisseyt-Chol is small and fascinating. Olivier explained that Boisseyt-Chol and many other northern Rhone winemakers include the grape stems in their fermentation process, increasing the tannins and enhancing the structure of the wine.  He showed us a clay vessel the winery used for fermenting some of its grapes. The ancient practice of fermenting wines in clay amphorae has become popular among some wine producers as they experiment with old practices in order to bring about an earthier component to their wines. 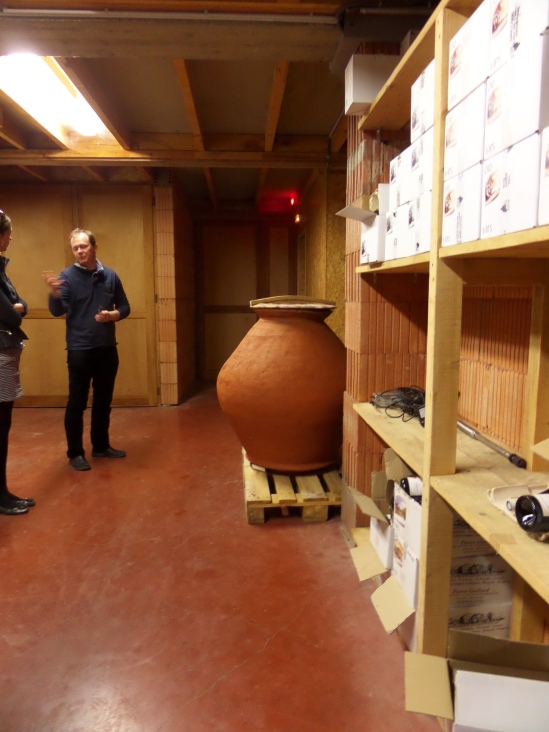 Agnes Chol greeted us warmly as we took our seats in the small tasting room.  We started with their 2011 and 2012 Viognier, which were buttery and smooth.  We then moved on to the reds.  The standout was the 2011 Cote-Rotie, a combination of spicy, robust flavors that were balanced by floral aromas. Cote-Rotie is predominantly made from Syrah grapes, though a small percentage of Viognier is allowed by law.  This is one of the few wines in France that is permitted to blend red and white grapes.

Cote-Rotie is an appellation of the northern Rhone sub-region.  An appellation is a legally protected geographical designation.  The hills in and around Ampuis are the only place that grapes can be grown for wines to be called Cote-Rotie, just as Champagne is an appellation, and sparkling wine from anywhere else may not be labeled as Champagne.  Cote-Rotie mean “roasted slope,” and the appellation is divided into two sections, the Cote-Brune and the Cote Blonde, which, the legend goes, are named after the hair color of the daughters of the 16th century owner of these hills, Lord Maugiron.  Whether this is true or not, the soil and sunlight are different enough between the two to produce two different styles of wine–Brune, considered more “masculine” and hearty and Blonde, more “feminine” and elegant.

I left with two bottles of the 2011 Cote Blonde, one of which I was determined to stow away in my luggage for the trip home!

We climbed into the tour van and headed the short distance to our next stop, Pierre Gaillard Winery. Gaillard at one time worked for E. Guigal, the producer who brought a resurgence of attention and demand to the northern Rhone with his sought after “La La” wines– La Mouline, La Landonne, and La Turque. These single vineyard Cote-Rotie have set price records for Rhone wines. 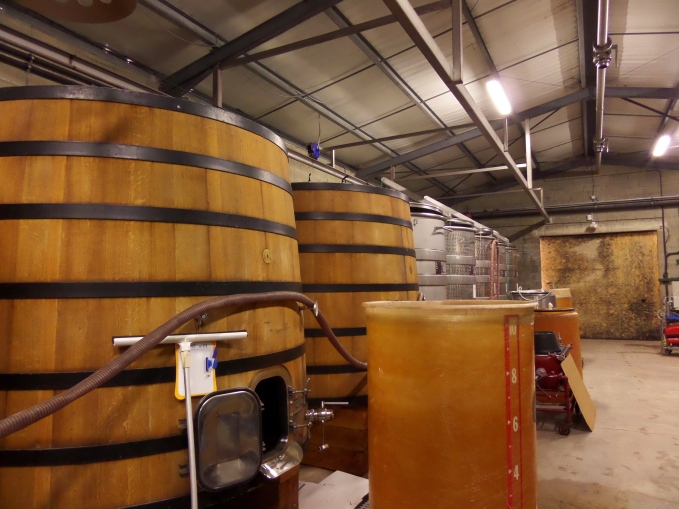 From the barrel room we could see Pierre Gaillard himself conducting a private tasting of a large array of his wines with a young Asian woman who was taking copious notes. As the interview drew to a close, we entered the tasting room to try a few wines.

I ended up purchasing the 2012 Cote-Rotie and the 2012 St. Joseph. As with Cote-Rotie, St. Joseph is a red that may include a small percentage of white grapes–in this case, Syrah along with Marsanne and/or Roussanne. 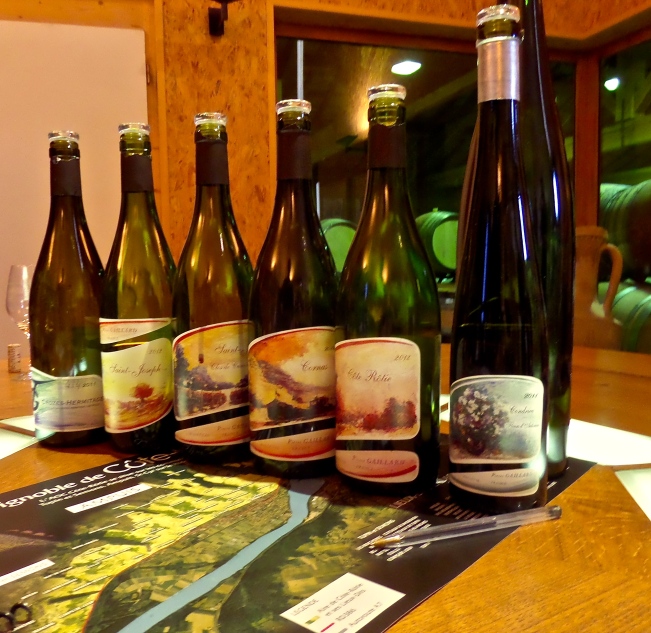 Our tour was done, and I climbed back into my seat in the van, lugging along with me my quatre bouteilles de vin, so glad that the northern Rhone had been part of my travels in France.